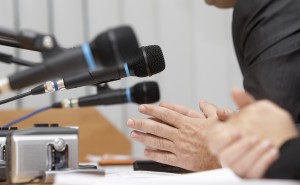 The US Commodity Futures Trading Commission’s (CFTC) Technology Advisory Committee discussed how blockchain applications could reshape the derivatives market at a meeting today in with special attention was paid to the need for industry standards and collaboration.

The hearing , originally announced in January but later postponed, featured testimony from representatives from both traditional finance firms as well as startups in the blockchain space.

Notably, the CFTC commissioners present indicated a willingness to avoid cumbersome regulatory demands on the still-nascent technology, with CFTC Chairman Timothy Massad remarking that, despite questions about what industry problems blockchain tech could solve, the agency doesn’t want to prevent any possible benefits.

In opening remarks , Giancarlo remarked that, in his belief, the technology “will have enormous implications” for the finance world, with applications for payments, securities settlement, banking and other sectors.

“Open ledgers may also make possible new ‘smart’ securities and derivatives that will revolutionize operational and transactional efficiency,” Giancarlo continued. “They may help reduce some of the enormous cost of the increased financial system infrastructure required by new laws and regulations, including Dodd-Frank.”

These remarks echo comments made by Giancarlo late last year , when he suggested that the technology could result in a reduction of jobs in the financial sector should adoption take place.

During testimony, those on the panel and the advisory committee appeared to agree that, as it stands today, the possible applications of blockchain tech in financial markets, particularly in derivatives markets, are still being examined.

Ro remarked that one of a number of lingering questions is how digitized assets, in this case tokens on a blockchain, would be governed under the law – particularly in the event of an issuing organization’s insolvency.

“I think one of the big hurdles that we need to figure out is…what happens in the event of a default, or a bankruptcy,” she said. “What regimes would cover these tokenized assets? And if they’re in transit from one jurisdiction to another, do these tokenized assets become recognized under law?”

The topic of collaboration between both financial institutions and regulators was frequent during the hearing.

For example, Levy remarked that there is a strong willingness among financial incumbents to engage in this process, highlighting that MarkIt believes open-source code will be an important aspect of this process.

“Even if you think about the words that are used in this space, share, peer to peer, distributed, all assume some level of collaboration,” he said. “And then we actually think open source is going to have a really big role in this space, probably more so than any other initiative in our industry, maybe ever.”

One subject that came up during the hearing was how regulatory bodies would conduct oversight of blockchain networks.

According to the panelists, this process could result in regulators maintaining nodes on a distributed network or being given special access to the data on these networks.

“I can attest from a CME group perspective the few consortium industry consortiums that we’re a member of, there is very much the inclusion of regulatory bodies to be at least, in the very least an observer status in the network, or, further to that, you know, having additional powers inside of the network.”

Slazas echoed these comments, suggesting that regulators like the CFTC would have access to a “dashboard” giving them a window into what’s happening in a particular network.

“I think that in just a few short years that we would be able to provide some type of mechanism where you have a window into that space, and I think it can be done in parallel to what is being done currently, off the blockchain,” he said.

While no indications were given as to specific actions the CFTC may take, it was suggested by some committee members during the hearing that aspects of existing regulations be adjusted to account for blockchain use.

In closing statements, the commissioners said further discussion and fact-finding about the technology is needed and encouraged.