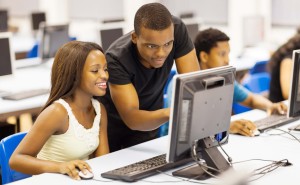 Late last month, the non-profit MIT Enterprise Forum of Cambridge hosted an event focused on new developments in clean energy distribution and how blockchain technology could play a role in how electrical grids of the future are built.

The event was sponsored by the Massachusetts Clean Energy Center, a government-funded agency that promotes clean energy expansion in the state, and included presentations from companies like IBM and startups like Consensys , Lo3 Energy and Grid Singularity .

Arguably the most notable demonstration of the night came in the form of Usizo, a crowdfunding platform designed to facilitate energy payments between donors and select schools in South Africa. The project was first announced last fall.

Grid Singularity CEO Ewald Hesse led the demo from Boston, with Lorien Gamaroff, CEO of Johannesburg-based blockchain startup Bankymoon , calling in via Skype from nearly 8,000 miles away, at the Emaweni Primary School in Soweto, South Africa.

As Gamaroff remarked, the nature of how power in South Africa has changed over the years. Rather than paying for electricity after it is received at a home or business, end users are instead paying for this electricity upfront.

For example, if a homeowner wanted to power their home for a day, they would go to an approved vendor who, in exchange for payment, would provide a special token that can be deposited in a smart meter. After the exchange, the lights turn on.

Gamaroff argued that this system can be prohibitively expensive, particularly for those living in rural communities. The system also relies on the existence of third parties who act as middlemen between end users and the power companies.

“A prepaid payment system makes the energy a lot more expensive because those vendors need infrastructure, there’s traveling cost, and it’s also very expensive to make those payments,” Gamaroff explained. “If you’re in a remote area and your lights go out, there’s no way to make a payment, no easy or electronic way to do it.”

This situation, he continued, could be circumvented through the use of digital currency, explaining at the time:

“You can now have a smart meter, a bitcoin blockchain-enabled meter, and foreign donors can send money directly to the meter without having to send it to an organization that will take or re-distribute the funds.”

The concept of using digital currency to prepay for electricity isn’t a new one – Gamaroff himself was involved in a previous effort back in 2014 aimed at facilitating prepaid electricity to South African residents using bitcoin.

Yet the new effort takes a more philanthropic approach, emphasizing bitcoin’s use case for international aid through its crowdfunding platform structure.

As demonstrated by Gamaroff and Hesse, the project involves two components – the smart meter programmed to accept digital currency and positioned at the building set to receive power, and the crowdfunding platform through which donors can contribute bitcoin.

Gamaroff shared photos on Twitter prior to the MIT event, showcasing the installation of the smart meter:

Installing the #Blockchain #SmartMeter for the #Usizo project at Emaweni Primary School in #Soweto #Johannesburg pic.twitter.com/Cua35eQXzo

Donors who contribute using the platform can see how much electricity a school consumes over a given period and can calculate how much power will be contributed based on how much BTC is given.

For the MIT demo, Hesse transmitted 1 BTC to the smart meter in Soweto, an amount that would provide roughly three weeks of electricity to the Emaweni Primary School.

Meanwhile, in Soweto, a large gathering of school administrators, teachers and staff waited in the darkness – it was the middle of the night local time – for the payment to arrive.

“Now what’s happening is that it’s now going through the blockchain, the meter is going to take the payment, it will calculate the tariff and load the required amount of electricity onto the meter,” Gamaroff explained during the demo.

Despite an initial delay, the system worked – the lights in the classroom turned on, sparking a wave of applause and cheers from both the crowd in Boston and the school staff gathered in Soweto.

Within moments, celebration and music broke out at the Emaweni Primary School as the demo concluded.

What comes next for the Usizo project?

According to Hesse, whose startup is developing a platform for connecting power companies through the use of blockchain technology, the project won’t be consigned to merely serving as a test.

He told CoinDesk that the future of Usizo will likely involve its management under some kind of non-governmental organization (NGO structure). Hesse said that the project has already generated positive interest from those parties, though when the transition would take place isn’t certain.

Yet for those educators in Soweto, the platform offers the potential to help keep the lights on – and to help those students to keep on learning.