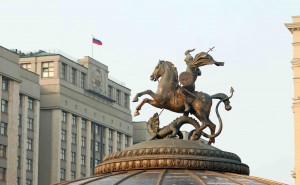 The Russian Finance Ministry has reportedly tightened its proposed penalties for the issuance of so-called money surrogates including digital currencies.

News service Interfax  has reported that, according to an unnamed source in the Russian government, individuals who issue money surrogates face as many as four years in prison. Executives with financial firms that release their own money surrogates could be imprisoned for as many as seven years and be restricted from holding similar positions in the future.

The report comes as Russia moves closer to formally weighing legislation that, if passed, would govern activities involving money surrogates, a classification of non-government issued currencies that includes bitcoin. Efforts to formalize restrictions on money surrogates began in 2014 .

In February, an advisor to Russian President Vladimir Putin issued public statements suggesting that the acceptance of bitcoin would be considered a criminal act .

At least one private company, payments firm QIWI , is pushing ahead with its plans for a digital currency called BitRuble . The company recently said that it is developing the project and working with regulators, including Russia’s central bank, which in the past has indicated its interest in the technology that underlies bitcoin.

However, QIWI’s plans for BitRuble have drawn fire from some members of the Russian government, and indications suggest that resistance to the project remains.

“This project can be effective for our market, but there are still misunderstandings concerning the technological and regulatory issues,” QIWI communications director Konstantin Koltsov told CoinDesk this week.