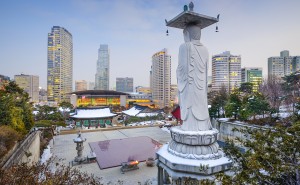 South Korea’s KB Kookmin Bank is developing a blockchain solution for international remittances with the aim of ushering in “safer and faster” foreign exchange services.

For the initiative, the commercial bank said it is partnering with local bitcoin startup Coinplug  to utilise patents the firm holds in the field.

In statements, KB Kookmin Bank explained that banks currently send overseas remittances via the SWIFT network, which sends payments through an intermediary before they arrive at the beneficiary institution.

However, utilising blockchain technology avoids the intermediary, and could reduce costs and result in possible savings for the customer, the bank said.

“Blockchain technology is a new trend and we are trying to adopt this technology in a low level of data integrity platform. We are planning to escalate our services further to provide more secure and comfortable financial services for our customers.”

KB Kookmin Bank is the largest subsidiary of KP Financial group, which according to KB’s 2014 annual report , it earned KRW 1.4tn ($1.16bn) in revenue from more than 30 million customers, an amount it estimates is more than half the population of Korea.

In the same announcement, Kookmin also announced plans to develop an “overseas fund transfer and data storage service” that can be used for verification when opening online bank accounts.

This new offering will also be based on distributed ledger technology, the bank said.

According to the company, the move follows a shift in stance by Korea’s Financial Service Committee that has enabled online verification to be used for this purpose, a new policy it said aims to promote online financial services and encourage financial start-ups.

Coinplug provides Koreans with a variety of bitcoin services, such as in-store card schemes and digital currency purchases via standard ATMs . The company has closed a number of funding rounds which have raised at least $8m since late 2013.