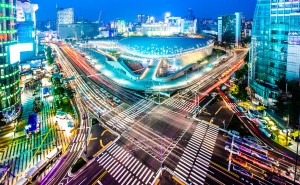 According to The Korea Times , KRX is in the early stages of developing a system for trades using the code that underlies bitcoin and other digital currencies. An exchange representative told the publication that the platform could help its OTC traders reduce the cost of transactions.

The representative told the newspaper:

“Though many steps remain before the system’s official launch, we expect this would help off-board dealers to trade more easily by saving their costs and efforts in seeking trade partners.”

The move, if fully realized, would make KRX the latest firm to use the technology to facilitate securities trades.

New exchange on the blockchain

Notably, KRX is just one of a number of stock exchange operators investigating applications for the blockchain.

US-based NASDAQ launched Linq , a platform for private securities trading developed with blockchain startup Chain, in November . The Australian Stock Exchange is also looking to integrate elements of the technology, a move that followed an investment in blockchain startup Digital Asset Holdings’ recent funding round .

Private firms are also looking to gain headway in the securities trade space through blockchain tech. Last summer, online retailer Overstock unveiled its tØ public and private securities trading platform, on which the company spent as much as $8m developing in 2015.

KRX was created in 2005, after the country’s three major securities exchanges were merged. The exchange reported $7.1bn in daily stock trading value for 2015.