Not so long ago, there was an almost constant flow of stories on digital currency’s many use cases, its acceptance by notable merchants and its role in dark web payments, but like the tales of Silk Road’s rise or the “Bitcoin Millionaires”, those days seem to have passed.

The industry, as well as those seeking to help it grow, are increasingly interested not in bitcoin’s use in payments, but in its underlying technology, the blockchain, a distributed ledger that provides real-time insight into asset ownership in the $5.6bn bitcoin market .

In this light, bitcoin is now perhaps best considered not just as an investment vehicle or currency, but as the longest-running proof of concept for how blockchain-based systems, those that both use its tech and innovate on its concepts, may improve finance.

However, there has been an increasingly enthusiastic discussion about blockchains or distributed ledgers that many industry observers fear is reaching dangerous levels.

Wall Street and its associated media have lined up  to tout the technology’s potential power to create faster, leaner trading systems. Bank after bank has headed down the path of, firstly, finding that blockchains offer intriguing possibilities, then, secondly, initiating their own research projects or joining consortia to develop proofs of concept en masse.

But in the general positive hubbub of late, there have been a small but growing number of sceptical voices calling out the burgeoning blockchain space and the media for over-hyping the potential of distributed ledger technology.

By doing so, they warn that banks could be falling into the same pattern of overpromising and underdelivering that seems to have stalled digital currency efforts.

Writing in the FT’s Alphaville blog , noted blogger on all things financial, Izabella Kaminska recalls that the blockchain conversation was pervasive at Davos this year.

However, in her reporting, she sought to paint such discussion as juvenile and uninformed, writing:

“On the streets of Davos this year there are only three discussions being had. One: robots are going to take over our jobs. Two: blockchain is amazeballs and three: FinTech is like blockchain amazeballs, but with even more possibilities to control and mould the behaviours of the common man,”

Kaminska is not convinced about the cost benefits of blockchains, however.

It is “imprudent” to make that claim, she writes, without there being any real proof of a working private blockchain and “the nearest candidate, the bitcoin blockchain, encountering ever greater cost and scaling challenges by the day”.

The comments are a reference to the ongoing debates about how to best scale the bitcoin network, up from the three-to-seven transactions it processes a second today.

Further, she points out that all blockchains have thus far been subsidised by funding rounds or speculative investors and eventually those investors will want returns.

“The jury’s still out on whether they’ll get that,” she says.

“It’s getting out of control,” says David Birch of Consult Hyperion, who makes a plea for some rationality in the dialogue on distributed ledgers in a new piece for Finextra .

In an article titled “It’s time to take a stand against all the blockchain crap out there“, Birch writes:

“It seems to me that in a relatively short time the word blockchain has become detached from its technological roots and from its location in the spectrum of shared ledger implementation options to become one of those almost generic chromewash terms, like, ‘big data’ or ‘cloud’ (there is no cloud, remember, it’s just somebody else’s computer) to deliver a superficial veneer of futurism.”

As well as a general lack of understanding over the terminology, Birch raises concerns over the utility of blockchains, which are widely touted as being able to disrupt a wide range of industries and potentially to change the world for the better.

While conceding that there is “no doubt” that blockchains are an interesting way to implement “one particular kind of shared ledger”, and the permissionless innovation environment unleashes tremendous creativity, “it’s a big step from that to ending world hunger”, he says.

A trio of authors over at the Open Data Institute (ODI), the UK-based non-profit dedicated to preserving an open tech culture, have come to a similar conclusion.

They recognise in a recent response  to the UK government’s Chief Scientific Advisor’s blockchain report , that blockchains do have potential in building confidence in government services through audibility, and also have a place in the collection and publishing of distributed data. Smart contracts are further singled out for their potential.

However, they suggested that some people may be trying to shoehorn the technology into places where it is not necessarily needed, or in use cases where it is not appropriate or possible for a successful marriage of systems and concepts.

“New technologies go through a hype cycle,” they write. “The challenge near the beginning of that cycle is to identify the uses and applications that will stand the test of time. Like most new technologies, blockchains could cause significant damage if used indiscriminately.”

“Blockchain technology is a new tool in our toolbox. We need to use it when it is the right tool for the job at hand.”

R3 research director Tim Swanson has put forth a similar criticism, suggesting that the technology has “jumped the shark” in a January slide deck , the phrase a reference to an episode of “Happy Days“ that is viewed as the point where the series was no longer creatively relevant. 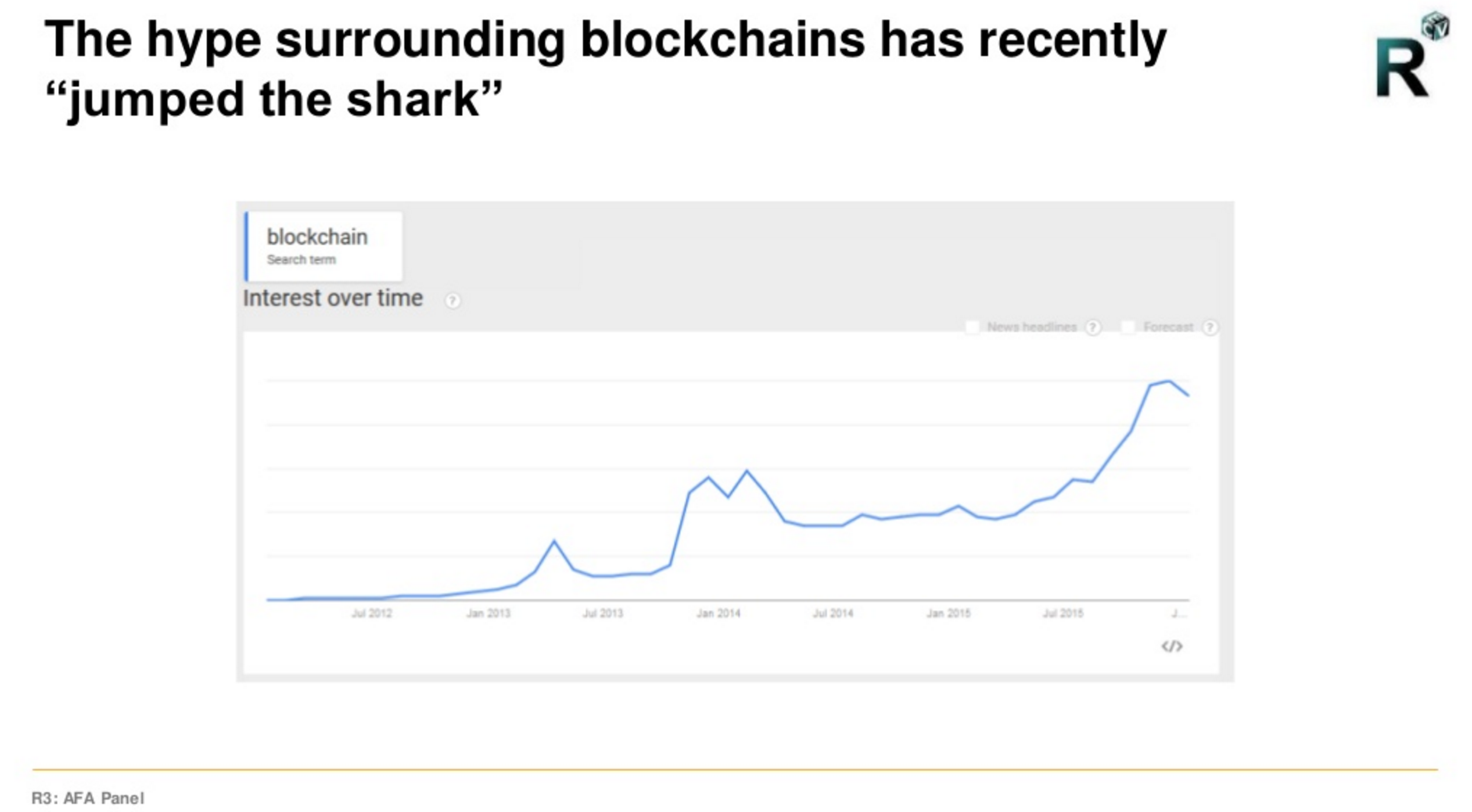 Swanson told CoinDesk that the message of the deck is aimed at the new community working on permissioned blockchain solutions, which he fears may run into the same “expectations management” issues as the bitcoin industry has.

“If we’re responsible in the statements we’re making publicly, we’ll avoid the over-promising, under-delivering of the virtual currency space,” he said.

Swanson cautioned that those seeking to popularize blockchain tech’s use in database management should pass on this caution to their clients.

Should the blockchain space fail in this regard, Swanson worries that the industry could face a funding crunch.

Investors, he said, are already wary of the space given the sky-high funding rounds of the bitcoin industry, and what he characterized as a lack of movement on those deliverables.

“If we as an industry don’t have deliverables by the end of this year, you’ll have the goodwill of financial institutions burned and they’ll think twice about joining the industry.”

There seems to be little doubt that blockchains will play some part in our future systems, or at least inform the future of database systems.

Major institutions such as Nasdaq and the Australian Securities Exchange are already undertaking blockchain projects that could see real-world usage in the very near future. Other blockchain services like the timestamping of documents and media are already out there as usable apps.

Yet, perhaps the sceptics have a point when they say that the technology is generally yet to prove itself.

For all the talk of disruption, many proofs-of-concept remain stuck in the lab, and it remains to be seen if their expectations can live up to the reality.