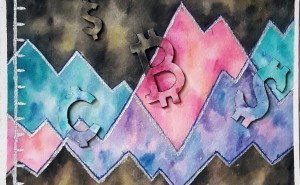 When it comes to bitcoin’s use as money, word-of-mouth has been its biggest asset.

The journey from Internet obscurity to interest from financial incumbents has been a long one, but it started with passionate users, willing to discuss its benefits with friends, and those friends, intrigued by the idea, began to explore – and spend – the currency themselves.

Bitcoin, because of its peer-to-peer design, thrives on connection.

As this conversation goes viral talk of digital currencies is spreading across the globe, one community that has been drawn to bitcoin (and the blockchain) is artists. To date, this includes big-name festival staple Imogen Heap , Nas and 50 Cent , among others.

This may not be surprising. Prone to fringe and emerging ideas, it’s a common belief that artists think differently, and bitcoin, whatever it is, is certainly different. Plus, there’s the economic incentive as well. As Etsy can attest, many artists are small merchants hit hard by traditional transaction fees, and bitcoin presents a way to differentiate a product to earn sales.

But what is bringing this group to the conversation? How are they participating? And is this demographic becoming an active part of the digital currency’s user base?

Interviews with global artists suggest they’re so far pulled in by bitcoin’x excitement and mystery, but that so far, this interest isn’t translating into use or activism.

The importance of connecting

Lindsey Nobel, Poesy Liang, and Karen Zahray are three artists who learned about bitcoin, all through positive word-of-mouth.

From a geographical perspective, the three artists span the globe, from Los Angeles to Malaysia to New York City, and from a style perspective, their artwork differs greatly. Yet each artist’s strong beliefs in the future of bitcoin connects her to the other two.

“I was down by Wall Street visiting an art collector of mine, and he told me about it,” Nobel, a California-based multimedia artist recalls when asked how she first heard about bitcoin.

For Nobel, both her art and technology play an important role in allowing her to stay connected with the rest of the world. “I see the world as a whole, not separated; even though we have borders, [humanity] is moving as one,” she said.

Nobel creates work that explores the idea of the many connections that are experienced in one’s lifetime, both within the human body and within outside communities. In her work, she has created a series of neuron paintings, utilizing dots, lines and drops of water to represent the nervous system and the transmission of signals within the body.

“These connections are how everything works,” she commented.

The web is as alive as the human body, she said, with ideas and currency being transmitted rapidly from one place to another, similar to the nervous system. Within the realm of bitcoin, she is intrigued by the ease of transferring the digital currency from one party to another.

“Artists have always been interested in trading. I think it’s a fascinating way of moving money around. It’s faster, and it’s just more interesting than banks. And as an international currency, bitcoin is bringing us closer to a global society.”

Liang specializes in different disciplines, including jewelry, fashion design and writing, but she also cited the role that personal connections played in her initial discovery of bitcoin. “I’m surrounded by many founders and startups. People talked about bitcoins, and I paid attention,” said Liang.

Available for purchase with bitcoin, Liang’s artwork is not limited to a single medium or style. Her cat paintings are cute and colorful, while her exploration of Chinese calligraphy displays an expertise in traditional methods.

“Looking at everything I do, it all contributes to one big picture,” she said.

Interviews suggest bitcoin may provide artists with the element of privacy that they are missing in other aspects of their life.

Zahray began to explore bitcoin upon being invited to participate in a money-themed group art show in Brooklyn held by a community of female artists in the city.

Her final piece for the show, a watercolor titled ‘Value and Mystery’, included a bitcoin symbol in the middle of the frame and was available for purchase in bitcoin.

‘Value And Mystery’ by Karen Zahray

Zahray alluded to his fascination with bitcoin’s mystery.

“The mystery of bitcoin is what initially interested me in the topic. I think people may see it as something very mysterious, but it’s so relevant to the way we live today. Everything happens online and it’s difficult to maintain privacy when everything’s so connected,” she said.

For an artist, a social media presence can be extremely important in promoting their name and reaching a broader audience.

Liang organizes her various interests, from jewelry-making to her artwork, in a series of Facebook pages. The tools available on Facebook have allowed her to reach at least three thousand individuals worldwide and to feel a deeper connection with those followers.

“We used to not want stalkers in our lives, and now, you make something and people follow you and you don’t even know who they are. But I think [social media] is important because it gets the work out there more. Our world is huge now.”

“Now, the world can be the judge of if my work is good or not,” she added.

She’s excited to see what will happen with it in the future, from observing what new uses it might have to discovering the effects that it could have on the way people do business.

“What interests me the most about bitcoin are all of the possibilities,” said Zahray.

For Liang, bitcoin has allowed her to reach a demographic that she wasn’t typically reaching with her older followers. She sees more merchants accepting the currency in the future, especially those that already have an online sales platform, and encourages fellow artists to begin exploring.

“The best way to learn about bitcoin is to jump right in,” she said.

Despite the interest that all three exhibit in bitcoin, however, only Nobel considers herself to be an active user of the currency.

The chatter about digital currencies in the art world may have resulted in increased curiosity, but actual usage still has room to grow and improve. The comments from those interviewed showcase that, while bitcoin certainly captures the imagination, it often doesn’t always end up being an everyday spending tool.

Zahray only recently began taking a closer look into bitcoin and has not yet used it personally. She does have a wallet set up and plans on purchasing some to hold onto, citing an interest in seeing what will happen to its value going forward.

“I will definitely use bitcoin if any opportunities comes up,” she said.

“I am not yet active, but I would love to be,” commented Liang. While she is proud to be a trendsetter among artists by accepting bitcoin for her work, she wishes that there were opportunities within the art market to exchange bitcoin.

“Word needs to get out more,” she said.

For Nobel, her main goal in using bitcoin is to increase the overall strength of the bitcoin network. She agrees that the word needs to continue reaching the art industry, and she is doing her part to spread the message.

“I hope to bring bitcoin to more artists, and I’m trying to get more art collectors involved as well,” she said.

Time will tell if the art world will see continued bitcoin adoption, but if it does, it may be an interest in connections that is drawing artists to the currency.