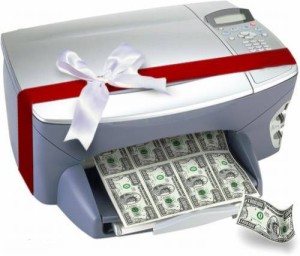 Bitcoin is a digital currency. It is open-source and decentralized which means it isn’t owned by any government, or controlled by any bank.

Nothing can be hidden/manipulated due to how transactions are verified on a sort of global spreadsheet called the “Blockchain” (trying to keep things super simple but if you want to read the ins-and outs you can find the full “bitcoin white paper” which goes into depth in how transactions are confirmed and “minded”) in which 1000s of computers verify each purchase transaction and bitcoin send on the network.

This means that essentially this spreadsheet is duplicated and synced live all around the world by 1000s of people – similar to a peer-to-peer system which has no focused centralization to control (or manipulate) it.

You can send bitcoin from your computer, tablet, smart phone or other device, to anyone, anywhere in the world, day or night.

The transaction fees are either 0% or a tiny fraction compared to the cost of a credit card payment or a bank transfer (especially internationally). And the time taken is dramatically reduced – on average, a transaction completes in 20-30 minutes (once it has been verified).

Bitcoin is a payment system introduced as open-source software in 2009 by developer Satoshi Nakamoto. The payments in the system are recorded in a public ledger using its own unit of account, which is also called bitcoin. Payments work peer-to-peer without a central repository or single administrator, which has led the US Treasury to call bitcoin a decentralized virtual currency. Although its status as a currency is disputed, media reports often refer to bitcoin as a cryptocurrency or digital currency.

Bitcoins are created as a reward for payment processing work in which users offer their computing power to verify and record payments into the public ledger. Called mining, individuals or companies engage in this activity in exchange for transaction fees and newly created bitcoins. Besides mining, bitcoins can be obtained in exchange for fiat money, products, and services. Users can send and receive bitcoins electronically for an optional transaction fee using wallet software on a personal computer, mobile device, or a web application.

Bitcoin as a form of payment for products and services has seen growth,and merchants have an incentive to accept the digital currency because fees are lower than the 2-3% typically imposed by credit card processors. The European Banking Authority has warned that bitcoin lacks consumer protections.

Unlike credit cards, any fees are paid by the purchaser not the vendor. Bitcoins can be stolen and chargebacks are impossible. Commercial use of bitcoin is currently small compared to its use by speculators, which has fueled price volatility.

Bitcoin has been a subject of scrutiny amid concerns that it can be used for illegal activities. In October 2013 the US FBI shut down the Silk Road online black market and seized 144,000 bitcoins worth US$28.5 million at the time. The US is considered bitcoin-friendly compared to other governments. In China, buying bitcoins with yuan is subject to restrictions, and bitcoin exchanges are not allowed to hold bank accounts.

How is bitcoin “printed?”

No one prints bitcoin in the same way that regular national currency is printed.

Whereas a bank can simply produce more money to cover the national debt, thus devaluing their currency and causing inflation..

Instead, bitcoin is created digitally, by a community of people that anyone can join. Bitcoins are “mined” using computing power in a distributed network. This “mining” is the method of processing and securing each transaction – locking them into the “blockchain” ledger.

Miners earn bitcoin as rewards for using their computing power when they verify transactions and solve the complex mathematical formulas associated – this now requires quite significant (and growing!) computing power.

There’s a limit to how many bitcoin will be created

The Bitcoin protocol – the code and mathematical rules that bitcoin is based on state that there will only ever be 21 million bitcoins created by miners.

This finite number means that bitcoin is deflationary rather than inflationary like all other national currencies; i.e. because the bank is constantly printing more money to cover debt and to fill new loans, the value of the currency as a whole falls – thus we have inflation. However with bitcoin, only 21 million can ever be created, so the currency is deflationary – as it becomes used more and more in demand, the price will rise as there is a fixed, definite, limited supply.

Now 21 million might not sound like enough if it is really to be adopted and used as a worldwide currency and accepted in all online shopping.

Bitcoin is everywhere, for sure you want to know it better.

The money 2.0 – this is certainly the best term to describe bitcoins. With its ubiquitous presence in the cyber world, who would not hear of this digital currency and asked, ‘What is Bitcoin’?

Bitcoin is a crypto-currency that is traded or exchanged online; hence, it does not have any physical form as it only exists electronically.  This digital coin utilizes peer-to-peer technology wherein it is directly exchanged from a person to another through the Bitcoin network making the transaction fast and secured. Moreover, Bitcoin is open-source; therefore, no one controls or owns it and every one can sure take part. It is used to pay for products and services like what fiat currency such as Dollar or Euro does.

Satoshi Nakamoto, a pseudonymous developer, is the first to describe bitcoins. In a 2008 paper, it has been defined as ‘a new type of digital currency’. Its first software has been released in January 2009 under the open source MIT license and since then, bitcoins have easily gained popularity.

How does Bitcoin work?

In a simple perspective, Bitcoin network is understood as a computer program that offers a personal Bitcoin wallet which allows users to send and receive bitcoins with them. However, if you go behind the scenes, you will find out that it’s more than that. Bitcoin Network is actually sharing a ledger called the “block chain”. This ‘ledger’ contains every transaction processed that allows the user’s computer to verify the authenticity of each transaction. Anyone can process the transactions by ‘mining’ wherein a computing power of a specialized hardware is used.

Advantages such as the following completely define the essence of what is Bitcoin.

–          Anonymity – Bitcoins are anonymous; hence, its transactions are safe, unalterable, and of course, do not contain any personal or sensitive credentials from the user.

–          Payment Control – Since bitcoins are exchanged via peer-to-peer method, anyone can send and receive bitcoins immediately anytime and anywhere giving you full control of your money.

–          Low Fees – Usually, bitcoin payments are processes with either low transaction fees or no fees at all. This is one of the reasons that made bitcoin a perfect payment solution that PayPal, credit card networks, or wire transfers.

–          Almost Instant Transactions – Unlike other payment methods, bitcoin transactions take only few minutes to get completed. It’s as fast as 1, 2, and 3 and sure easy as well as hassle-free.

Given the aforementioned advantages, Bitcoin has also become the perfect solution to online gambling. In fact, it has recently been adopted as the main mode of payment in several betting platforms such as the following:

‘What is Bitcoin?’ is certainly a simple question to answer. However, it isn’t enough since its definition entails different aspects. But keep in mind that once you have known and learned all of these, sure advantages and convenience will be for you.